Body cameras may be commonplace in other cities across the country, but in many parts of Kern County, there are not enough bodycams to go around, making the truth much harder to uncover.

Within the span of one hour Tuesday night, there were two officer-involved shootings: one in Oildale where a sheriff’s deputy shot and killed an armed man during a chase, and another on White Lane where a Bakersfield Police officer shot a reported home intruder who had a gun.

In both incidents, body cameras were rolling. When those videos are released, the public can make its own judgment. Were the officer and deputy acting in self-defense? Or could deadly force have been avoided? However, for about a third of shootings by law enforcement this year, there hasn’t been bodycam footage to showcase the truth of what happened, especially in remote areas of the county like Mojave, Delano, and other cities.

Kern County is known for having one of highest rates of officer-involved shootings in America, and that number is rising in 2020. In a year of protests over police brutality and when people are calling for more police accountability, people in these remote parts are being shot and killed by law enforcement with no video evidence of what happened.

Video evidence often clears officers, especially if bodycam footage shows a suspect charging forward with a weapon. Other times, when videos go viral, judgment is in the eye of the public—like in the case of George Floyd.

“We never want to see what happened to George Floyd ever happen again,” said Congressman Kevin McCarthy. “I think some of that frustration out there was all the things that happened when there wasn’t a video camera around. And that’s why I believe the body camera helps everybody have the truth, the honesty, and transparency we’ve all desired.”

On September 3, just after sunrise, 37-year-old Fernando Napoles was walking along Highway 14 near Cantil in east Kern. Since becoming homeless a couple of years ago, he’s wandered the desert, living in makeshift shelters. When someone driving by that morning saw Napoles, they called the Sheriff’s office saying he had a gun.

When Deputy Christopher Saldana arrived, KCSO said Napoles got out of a car then raised a shotgun at the deputy. That’s when Deputy Saldana fired, according to KCSO.

Napoles’ family is confused how he could’ve gotten a gun or a car. They were crushed when they learned there was no bodycam footage of the incident to bring out the truth of what happened.

“We have to go with what (deputies are) saying? When it’s very hard for us to even believe that that’s what happened,” said Adriana, Napoles’ sister.

The family admitted they would rather there be bodycam footage even if it was to exonerate the deputy.

“If my brother was at fault, I would’ve been like ‘good job. You did what you had to do,’” Marlen said. “Now it’s like, we don’t know who to trust.”

A month after Napoles was shot, there was also no bodycam footage in another fatal deputy-involved shooting in Mojave.

On October 2, 39-year-old Mickel Lewis had just gotten dinner with his girlfriend and her two teenage daughters when a deputy pulled him over to check his parole. According to KCSO, Lewis hopped out of his truck and ran. They say Lewis then ran back to his truck, reached inside, and charged at the deputy. That’s when the deputy fired.

“That’s not what happened. Why are they slandering my fathers name?” said Lewis’ son, Mickel Jr.

The family insists Lewis was unarmed — no gun or knife.

“This situation just makes my father another statistic of another African-American shooting, and it’s unacceptable,” Mickel Jr. added.

Neither of these incidents had video evidence because the 2017 federal grant that funded bodycams for the sheriff’s department wasn’t enough to supply the whole department. Only deputies who work in greater Bakersfield and Wasco have the equipment. Deputies who patrol the remote areas of our county do not.

In 2015, law enforcement in Kern had the highest kill rate in America, with 23 officer-involved shootings. After investigative reports by KGET and The Guardian newspaper, that number dropped drastically to eight in 2016. Despite fewer officers firing at civilians, no officers were shot that year.

Since then, the count has crept back up.

With 2020 not over yet, we’ve already topped last year’s number with 19 officer-involved shootings. Fourteen of those involved KCSO deputies. Only half, or seven, had bodycam footage. Only one of those videos has been publicly released.

Bakersfield Police had four officer-involved shootings. There was bodycam footage all of them, each available for public viewing on BPD’s website.

Bakersfield Police Chief Greg Terry said, “we’ve worked very hard over the last several years to improve relationships, to repair hurts, to increase the level of trust. We’re not there yet, but it is work we are continuing to do.”

As of July, all uniformed Bakersfield Police officers are equipped with bodycams. That’s not the case with KCSO despite Sheriff Youngblood’s promises.

After the death of George Floyd in May, Sheriff Youngblood said, “we’ve done a lot of things to try and mitigate abuses by officers. We’ve equipped all our patrolmen with body-worn cameras.”

“We felt that we were going to be able to get the funding, however due to COVID and other cuts, the budget wasn’t fully funded, and we weren’t able to purchase them in this budget year,” Swanson said.

So outside of greater Bakersfield, no substation except Wasco has any body cameras.

“Our hope is within the next year to be fully funded with it, but until then, we’re doing law enforcement the way it has been for many years,” Swanson said. “We’re getting witness statements, we’re getting statements from officers, we’re looking for surveillance footage, and we’re looking at the physical evidence at each individual scene.”

According to our analysis, a bodycam costs $3,100 for the first year, then $1,050 each year after for video storage. To fully equip the department, KCSO needs at least 200 more bodycams. So, the first year alone would cost $620,000. The department doesn’t know exactly when it will get that money.

In October, Congressman Kevin McCarthy and House Republicans introduced the Commitment to America Security Act. The bill would add funding for 500,000 bodycams nationwide, but it’s not cheap.

“We’re talking about not to defund the police, but to add $1.75 billion dollars,” McCarthy said.

Those who want the police defunded say they’ve lost trust in law enforcement. Others like Congressman McCarthy say the police need more money to build that trust back up.

McCarthy added, “it would be funded through the taxpayers, and we would make it part of our federal program. I don’t think it’s costly to have safe and secure streets.”

McCarthy’s call for more bodycams is a beacon of hope for Kern County, but the timeline of his bill is vague, and political differences play a role.

“Well we would do this very quickly if it was passed,” McCarthy said.

Even if the bill passed, it would take time for Kern to apply for a grant, and it would take years for the bodycams to actually be put into service.

In the meantime, what happens while people in Kern County continue to get shot by officers and deputies?

McCarthy responded, “well you got the training now, and it is a very dangerous job to be a police officer or to be a sheriff. Think about these deputies who are working in eastern Kern. These deputies are all alone. There’s people that are shooting at the officers, coming at them with weapons and others.”

The families of Fernando Napoles and Mickel Lewis may disagree with Congressman McCarthy’s assessment of deputies, but they all agree body cameras are one of the clearest ways to prove what happened. 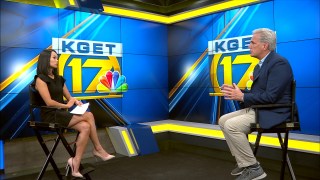 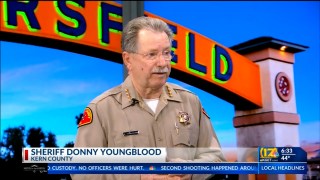 Mourning a deputy shot and killed

Life with Monkeypox: “You feel very alone in this” …

Non-profit group gives away shoes to kids for upcoming …

Misfired rockets may have killed over a dozen in …

Former BPD officer killed in line of duty in Colorado