IQ Protocol and Partners Announce over $20,000 in Retail Prizes with ‘Into The IQverse’ Community Battle Royale

16 project communities totalling over 1MM participants will battle for stablecoins, project tokens, NFTs, and whitelist spots worth over $20,000

Tallinn, May 02, 2022 (GLOBE NEWSWIRE) --  IQ Protocol, the collateralless NFT rental solution, will be leading a mass-participation retail event with over $20,000 in prizes. 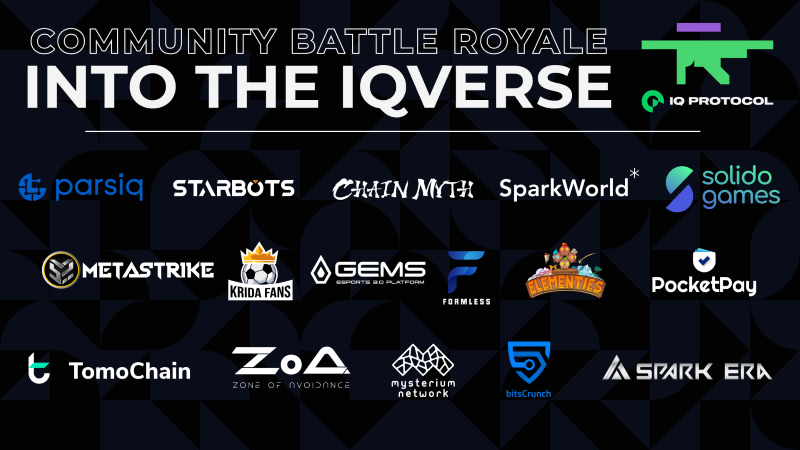 The winners will be determined by aggregate score through 5 rounds of play with a live leaderboard which will be updated on the campaign page after each round.

*Rounds 2-5 to be announced in the community* 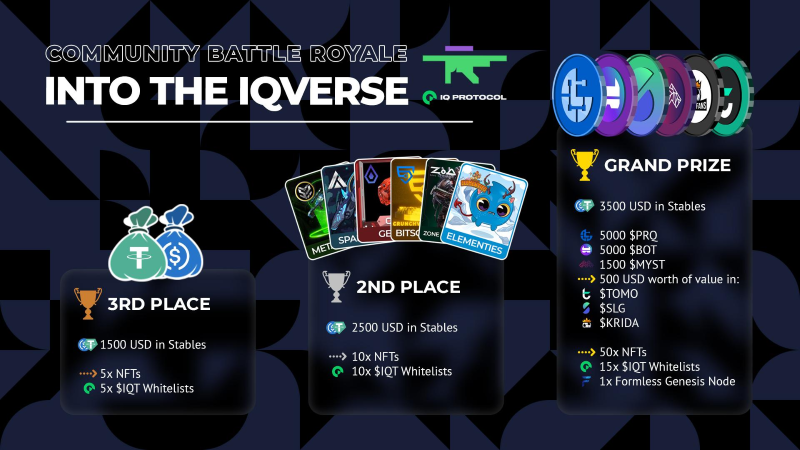 NOT PART OF A COMMUNITY..?

YOU CAN PARTICIPATE IN THE SOCIAL FOLLOWING BOUNTY!

In addition, noncommunity affiliated participants will be able to compete for the special pool of 100x$50 UDST prizes.

Join the bounty by following instructions on the Viral Sweep campaign page and start following the participating communities from 2pm UTC on 2nd May through the IQverse Battle Royale portal.

BitsCrunch is a blockchain analytics firm, providing AI-powered security service meant to make assessing purchases and protecting your assets easier than ever. As they see it, the world is moving more and more towards favoring a creator-economy powered by blockchain technology. They are confident that NFTs will become ever more relevant as we create the future. Because of this, while the security of digital assets is important now, it will become increasingly important as the ecosystem grows. As an analytics platform, bitsCrunch focuses on providing services to help secure NFT marketplaces. They offer a range of solutions, each geared towards a different facet of digital security.

Elementies is a Pokémon-inspired, Play-to-Earn game built on the Solana blockchain. Illustrated in a friendly, whimsical manner, the world of Fuzzi Mountain immediately invites us in. Here, we encounter a multitude of Elementies, the main characters of the game. Each being unique in look, traits, and characteristics, it is with these Elementies that players will battle one another in 3 vs 3 competitions, defeat bosses, or turn their attention to environment creation. All of these play options offer chances to win rewards.

Formless’ vision is to create a large-scale GameFi aggregation platform, providing users with the means to easily search for, find, and play the games they are interested in. Having already built a community of over 200 games and 50 guilds, they are well on the way to accomplishing this feat! But not only that, Formless also aims to make blockchain transactions (in-game or otherwise) as simple as possible: their portal will integrate not just a multi-chain wallet, but also vital information for a game’s community. Their vision is to help make Play-to-Earn games more available to gamers, as well as making the task of finding audiences easier for game developers.

Metastrike is a first-person shooter created using blockchain technology. Modeled on the likes of Counter-Strike: GO (CSGO) and Call of Duty (COD), Metastrike offers players all the essential features players have come to love and expect from a first-person shooter. With multiple modes to choose from — zombie mode, team mode, guild mode, and deathmatch — players can play-to-earn tokens and NFTs in a number of different ways. The game also boasts a VR gameplay feature, bringing a whole new depth to the gaming experience.

PARSIQ is a full-suite data network to build the backend for all Web3 dApps & protocols. The Tsunami API, which will ship in July 2022, will provide blockchain protocols and their clients (e.g. protocol-oriented dApps) with real-time data and historical data querying abilities.

PocketPay has created a Solana-based dApp, offering users multiple DeFi options and payment gateway solutions. Central to PocketPay’s offerings is a non-custodial wallet. PocketPay is, however, many things — not just a wallet. It also offers users the ability to swap tokens, the means to stake and earn tokens, as well as access an NFT marketplace.

Importantly, PocketPay is actively forward thinking: beyond these functionalities, they are also building blockchain infrastructure solutions for off-chain and Web2 merchants. In fact, doing so is central to their vision of spreading awareness about decentralized payments among crypto and non-crypto users alike. Using their app, businesses will be able to integrate an “Easy Pay” crypto payment method seamlessly into their everyday transactions.

Solido Games’ platform brings together a number of elements of Web3: the metaverse, blockchain ledgers, and decentralized networks. With their intuitive user interface, Solido represents a step forward for blockchain gaming, bringing players, developers, and NFT traders together onto a single interactive platform.

Solido’s platform includes three core features: (1) a Play-to-Earn game aggregator, which players with access to a broad scope of Web3 games from across multiple blockchain networks, (2) an MVP launchpad, which provides creators with the ability to raise funds, develop and produce their games, and launch their product in the Solido ecosystem, and (3) an NFT marketplace, where players procure their assets, buying them, selling them, trading them, and borrowing or renting them!

Starbots is a BattleBots-inspired game based on the Solana blockchain. Players gain $GEAR tokens as they play and interact with other players. Throughout the game, players command a crew of Stardogs to go on missions and compete in battles. $GEAR tokens are earned in various ways, for instance, by strategically assembling their own robots, by winning battles, by completing missions, or by conquering new lands.

ChainMyth is a multiplayer (5v5) online battle arena first-person shooter game. As the creators describe it, the game is inspired by Valorant, and shares gameplay elements with Count-Strike: Global Offensive and DOTA. The look and feel of the game references Ancient Indian mythology, with gods and goddesses challenging one another. Being a play-to-earn game, winning battles will earn players $MYTH (the game’s native, fungible token).

Bringing a host of Web3 services under one roof, GEMS stands for GameFi, Esports, Metaverse, and SocialFi. At root, their aim is to build a singular online-to-offline ecosystem, designed to operate as a central hub, connecting crypto gamers both online and in the real world. Their connection to the real world comes in the form of the GEMS founding partners’ chain of Esports hotels. Their mission is to create a symbiotic relationship between the multiple types of gamers today. What makes GEMS unique is the combination of the Web3 elements they bring together within, as they call it, Esports 3.0.

KridaFans is a next-generation fantasy soccer platform built on the Polygon blockchain. Like many of the traditional fantasy sports platforms, KridaFans is easy to use. You simply pick a game out of the various ongoing tournaments, build your team, and earn rewards! In order to participate and play on the platform, KridaFans’ users stake their $KRIDA — KridaFan’s native token — which functions as both a utility (such as liquidity mining, staking, NFT minting, etc.) and a governance (voting) token.

Mysterium is building an open-source, decentralized ecosystem of protocols, tools and infrastructure that make the internet borderless. Their flagship product is their decentralized peer-to-peer VPN built on the Polygon network. Since 2017 their team has been hard at work creating a globally decentralized network of residential IPs. As of today, they have put together an impressive network of more than 10,000 nodes.

Created by Firework Games, SPARK ERA is a Massive Multiplayer Online Role-Playing Game based on an interstellar background. Relying on the principles of GameFi and on in-game assets that take the form of NFTs, SPARK ERA allows gamers to play the role of intergalactic citizens of different classes and races, to pilot over 1,000 types of ships, and to explore a multitude of over 20,000 galaxies comprised of over 100 million planets. With so many possibilities at hand, players of SPARK ERA also have the option to swap out a host of accessories and functions on their ships, to join in the network of legions, and to battle other players in interstellar wars, winning them glory and rewards.

SparkWorld* has a vision of creating better, more equitable conditions for popular blockchain events, such as whitelisting, randomized mintings, and presales of NFT collections. Events like these usually attract massive crowds of people, wanting to get into a project as early as possible. However, they are often organized in ways that require very little thought from projects. That is, they are typically based on a first-come-first-serve or a randomized basis. Even if you’ve been whitelisted! The vision behind SparkWorld* is to give equal favor to everyone in a community when it comes to NFT and token distributions — not just to those who have better luck with time or resources. In addition to offering platforms a community-centric way of distributing assets, SparkWorld* also offers a marketplace, where projects can on-ramp their new offerings, and users can access NFT collections

TomoChain is a blockchain (powered by Proof-of-Stake voting consensus) and product ecosystem that aims to reduce the friction faced by projects seeking to utilize blockchain technology, as well as provide a firm foundation upon which projects can excel. Their focus is on providing users with a chain that is reliable, prioritizing the key features that blockchain projects look for, such as speed, privacy, usability, and ease of liquidity. With its fast network speed (running at 2000 TPS, 2-second block time), near-zero fees, and EVM compatibility, TomoChain certainly has features worth boasting about!

Zone of Avoidance is a sci-fi RPG, in which players can battle one another or embark on a campaign, making their claim against the hostile environment. After generations of space exploration and conflict, three races — Humans, the Syndicate, and the Raddans — are in a perpetual war to maintain control over the universe. ZoA offers players the chance to select their race, and choose one of five varied spaceships. The ships are filled with a crew of characters that players use to train, fight, and eventually turn into the heroes of the galaxy. As players progress, they have a variety of opportunities to earn upgrades, rewards, and the ability to move up the game’s ranking system. The characters, ships, and items in ZoA take the form of NFTs, which are customizable and upgradeable throughout the game. The best NFTs will be sought and earned by top players, creating an actively competitive in-game environment.